My student loan balance is NZD$0.00. I can’t even talk about how amazing this, how for the first time since I entered Tertiary Education twenty years ago I’m debt free.

So here’s the thing. Education is EXPENSIVE. My student loan all up was $62,640.13, not including interest. What the hell. Do you know what that got me? A four year Bachelor of Science in CompSci. I also did minors in Psych and Philosophy, because originally I was going to do a double and get a Bachelor of Arts too. Right up till I learnt it would take me an extra year or two of study. It was also a bit of an identity crisis in the form of half a Post Grad Diploma in Early Childcare Education. Academically, rocked it, lots of As. However working with kids is not everything its cracked up to be (it’s really HARD), and outside the lovely Maori Medium centre my first practicum was held in, I couldn’t handle the bitchy politics that is kindergartens run by the NZ Government. I quit four days into my second practicum.

Now? Now I don’t really use the knowledge that I gained with that fancy degree. I use it more like a badge in a job application. It says hey, I know you have a checkbox on your candidate criteria for a university education and you can check that box. Now that that’s out of the way, let’s talk about what relevant skills I have. My degree doesn’t get me jobs, my experience does that. It was $62k for a tick in a box.

I’d expected to be paying off that loan for the next ten years, whittling it down month by month. Because I’m overseas, it wasn’t interest free. I was very very aware of that – interest was accrued daily, and it was INSANE. I paid $12,624.37 in interest on top of my loan. Woah buddy. Still, I had a plan and I mostly stuck to it, sending almost $750 home a month to pay it off. It was a tricky time though, because interest could be anywhere between $300 – $400 a month. It felt like a ridiculous amount, that half my payment was going towards keeping the interest at bay and barely touching the capital. Whelp. Still, a little is better than none, so I kept at it. I had a plan, the numbers were going down, and eventually I’d get there.

What I didn’t count on was my folks having a little bit of a windfall. I never expected my folks to pay for my tertiary education, I always assumed it was on my shoulders and I’d take care of it. So, when my Dad told me over Skype that they had decided to make a payment on my behalf I got all choked up. It was gracious and unexpected and I cried. It was enough to pay off the bulk of my loan and I transferred the last $900 across yesterday. 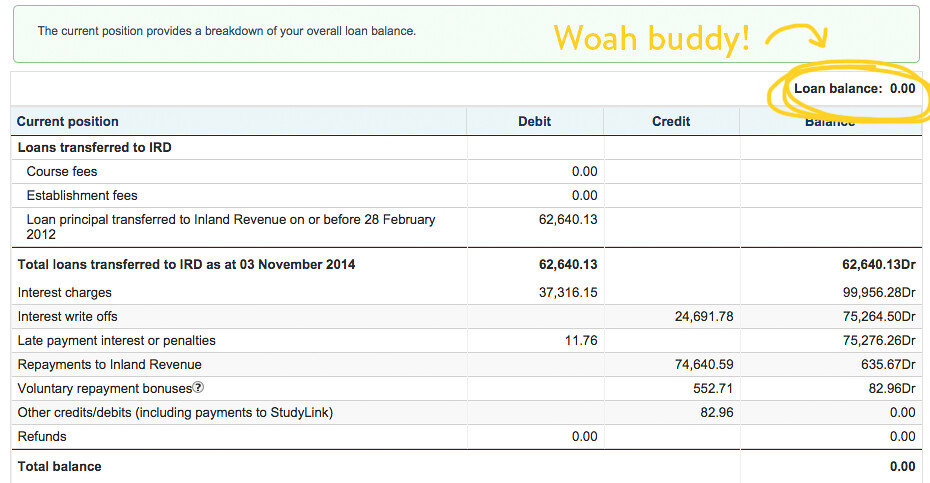