Number 13 on The List… after my last post about tigers it’s difficult to come back and tell you how I rode and swam with elephants. I know that my last post was also about animal abuse in the name of tourism and profit and it’s almost as if I hadn’t learnt anything last time, because this is the same line all over again. I did this, I rode and swam with elephants and I did it TWICE because I loved it so much.

It’s a weak excuse, ignorance, but the truth was I actually didn’t know. This experience was sold as a delightful add on. It was on The List, and so I said yes. Ticked the box that said free elephant experience if you get the tiger one. See the tigers and swim with the elephants! Fun times all around. Then because the first time was so phenomenal I booked a second experienced when we had a spare day.

Obviously that week was big on animal abuse, one that I recognise I encouraged with my tourist money, and I didn’t even realise. It wasn’t until I got back to the UK a good month later and was going through the photos that I started to wonder, and then I saw the huge outcry that Dooce got when she happened upon a baby elephant unexpectedly… and my heart sort of dropped. I read her post, and clicked through all the links, and followed more down a rabbit hole of how very not awesome elephant tourism is. And then I put some search terms into google and went down a few more rabbit holes.

So, I’m going to post the pictures from both days and talk about how easy and amazing it was, and how very wrong the whole situation is. I promise this is the is the last animal cruelty tourist post I’ll write, because I don’t plan on supporting any more of these experiences with my tourist money. My eyes, 100% wide open. 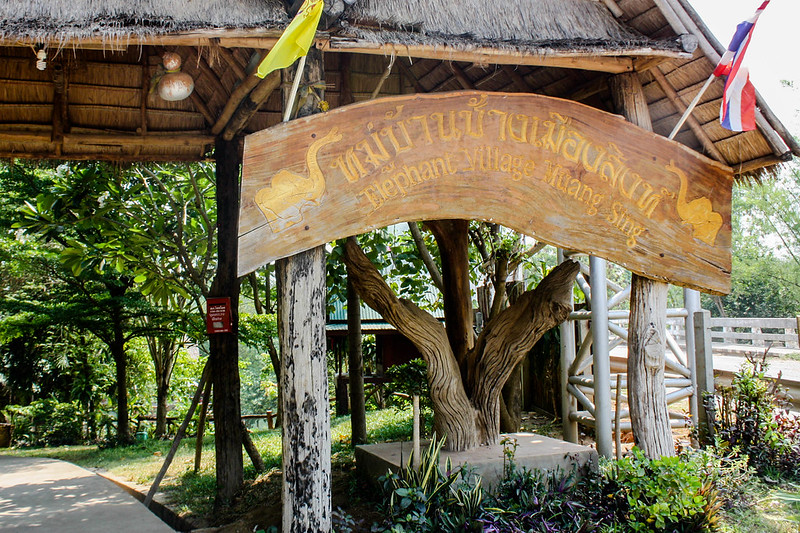 After the tigers, we were driven on our tour out to Elephant Village Muang Sing, which is small elephant park. So small it doesn’t have a website, and is mostly advertised through tour operators. It wasn’t far away, really. First up we went swimming, which ideally was to help bath the elephant.

We got on the back of an elephant, and walked down to the water. Once in the water it was lovely, really. We sat on the back of the elephant has he waded around. Sometimes he sat, sometimes he stood. What I didn’t realise at the time is that he was 100% following instructions from his mahout for our benefit.

It is not okay to train animals behaviour to do tricks for tourists.

But that’s what he did. You stand here, and he lifts his trunk, lifting you into the air. You stand here, on his leg, and he’ll lift you up, a nice board for you to dive off, or pose for a photo. 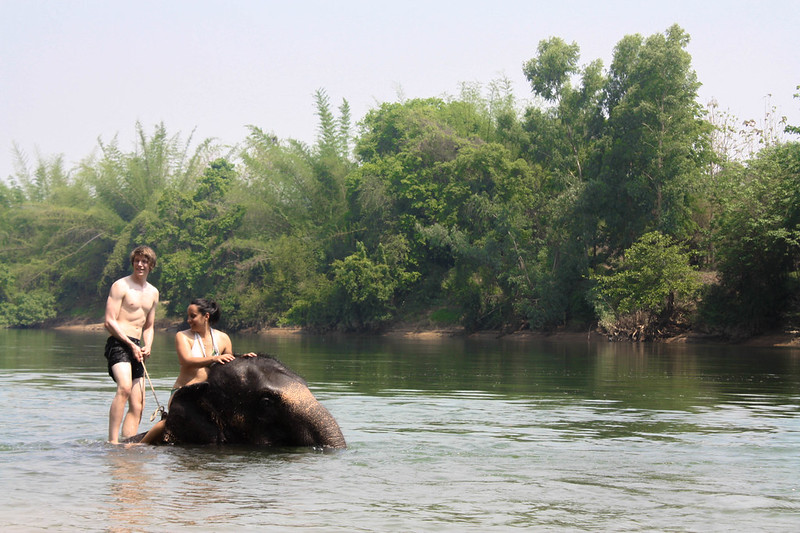 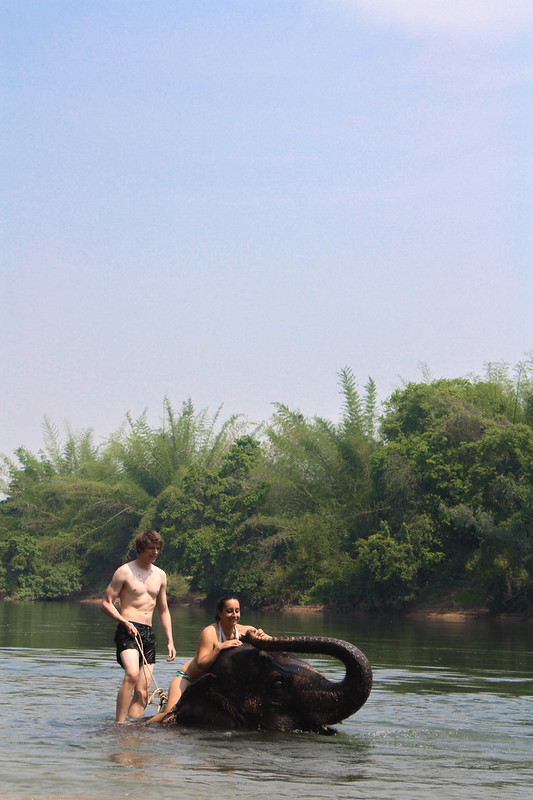 We have a million photos. Millions of them. I’m actually ashamed to post them all and realised that I was posting two of the more tame ones. Truth is that most of them actually look more like this one:

It is terrible, I know this. But it was also amazing – an absolutely phenomenal experience. Scrubbing away at the elephant with little brushes while he moved around us was really lovely. His skin was rough, and bristly in most spots, and in others (like behind his ears) so soft and silken. He was massive, and I felt tiny and small next to him. It was pretty amazing.

Next up, we had an elephant ride.

Dun dun dun. This was at least really physically uncomfortable. Riding behind the elephants head was a million times more comfortable for us than riding in that horrible chair. It’s even more horrible for the elephant.

Add two humans and that horrible chair contraption, factor in (based on the number of sessions we could pick from) 10 half hour walks a day and that’s a good five hours a day of carrying around a lot of weight on a back that isn’t meant to be carrying that much weight around. Which means the more we ride them, we’re causing some seriously long-term harm. Boo. 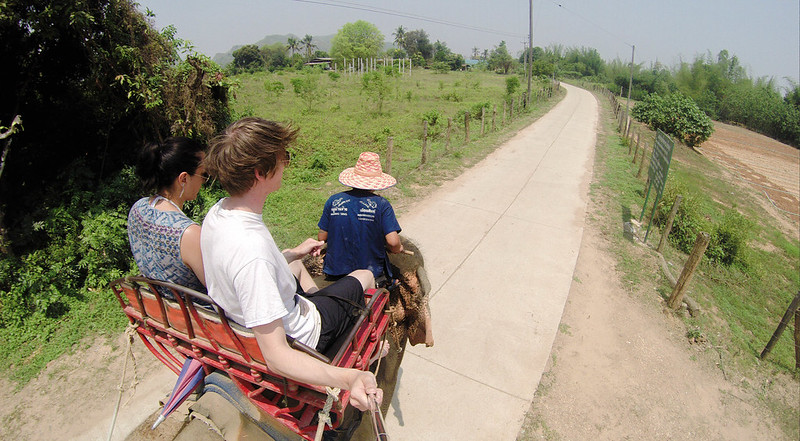 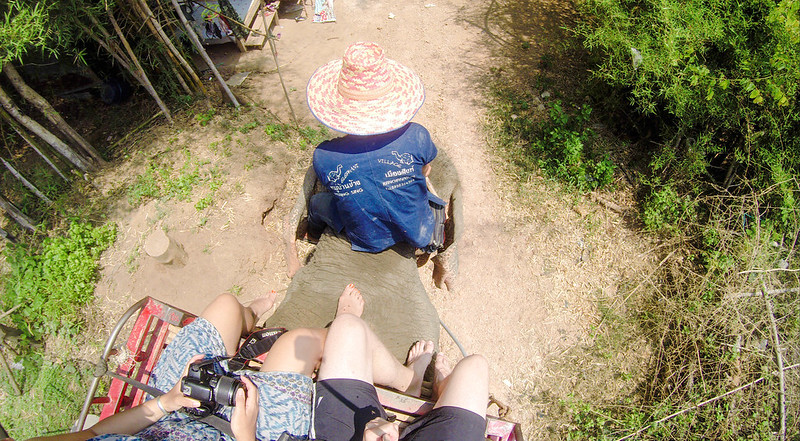 I think even worse for me though is that wild elephants won’t let humans ride on top of the. To tame a wild elephant, a baby elephant is basically tortured.

(source. Photo taken by Brent Lewin / Redux Pictures. Brent won a Science/Natural History Award of Excellence for this image at the Pictures of the Year competition in 2011.)

Here is a video. I actually couldn’t even watch all of it. I got a few seconds in and felt sick (and ashamed, and guilty….)

It’s ghastly. Horrific. I HATE it. But this is how they tame elephants. They call it crushing (or Phajaan). They take them away from their mothers, confine them to a small space and beat them clubs and prod them with bull hooks. On top of that, they are starved and deprived of sleep. They learn to fear the bull hook, and take commands from their mahout.

We take a relatively relaxed ride through the jungle on the back of an elephant with no idea that, to begin with, this how they train them to do that. 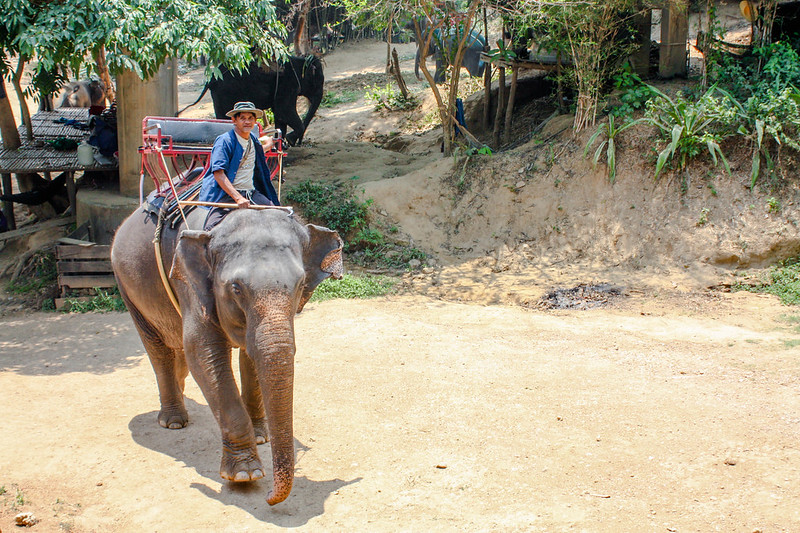 Yeah. Look at that massive big hook that mahout is carrying. He carried that the whole way around our walk.

Afterwards, we fed them. You buy a bucket of bananas and stand on a balcony and they come up and eat. Considering how much they eat, I feel like this little single bit was acceptable. This bit alone was okay (and I did lots of checking, turns out elephants eat bananas if they can find them, and they’re not deprived of food outside of crushing, and they get enough foilage… I was sure at this point that by feeding them I was doing something wrong). 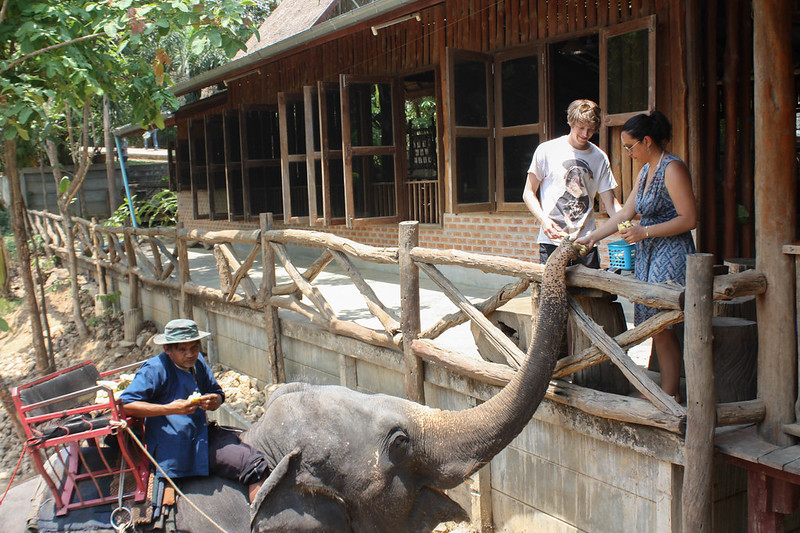 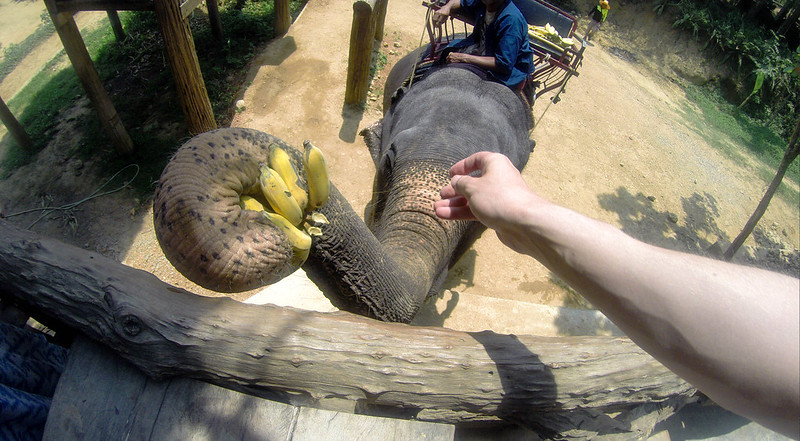 And then we gave our mahouts tips for the amazing experience (because it was amazing, ignorance allows things like this to be amazing) and we went home, uploaded some shots to instagram and talked about how fantastic that whole thing was. What an amazing day! Oh, we had no idea. No idea about the animal cruelty that had been inflicted so we could have had such an amazing day.

It was so amazing, and we talked about it for such a long time that a week later we did it again. This time we were in Krabi, and visited Nosey Parker Elephant Camp (yes, that was it’s actual name).

This time we did a trek on the elephant, which seemed fine enough. This elephant had an experienced mahout who generally guided the elephant around with words and clucks rather than using pain or the bull hook he carried with him. He was pretty lovely, actually. The elephant seemed pretty happy, and was allowed to stop and eat and she pleased. Her daughter met us half way around and they were clearly affectionate with each other.

Which is to say it all seemed so relaxed and easy. It’s hard to align such a lovely ride with all the horrible training that she had to go through to get there. 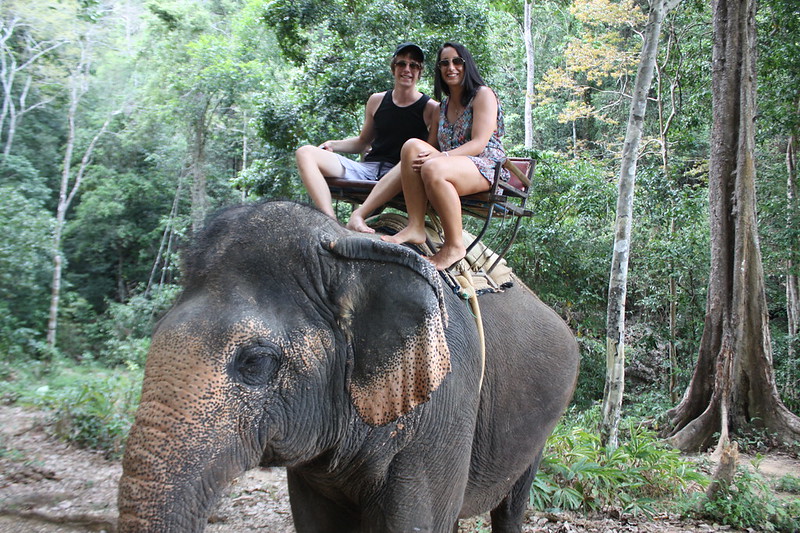 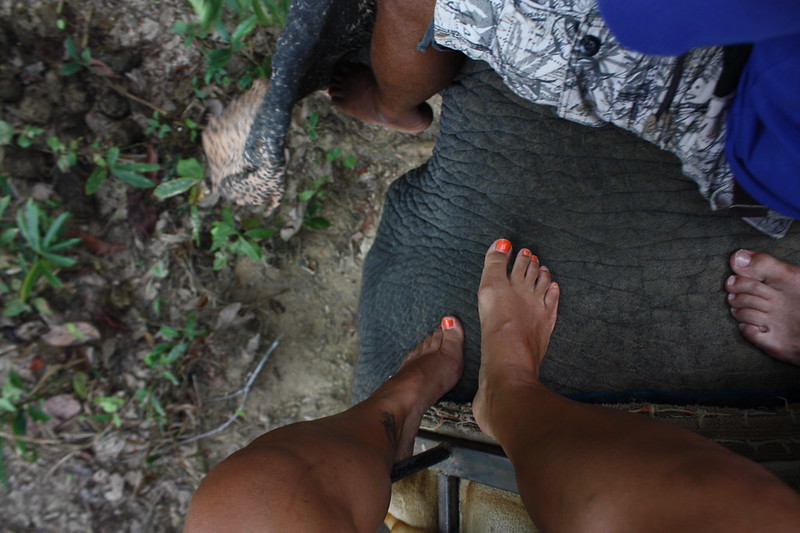 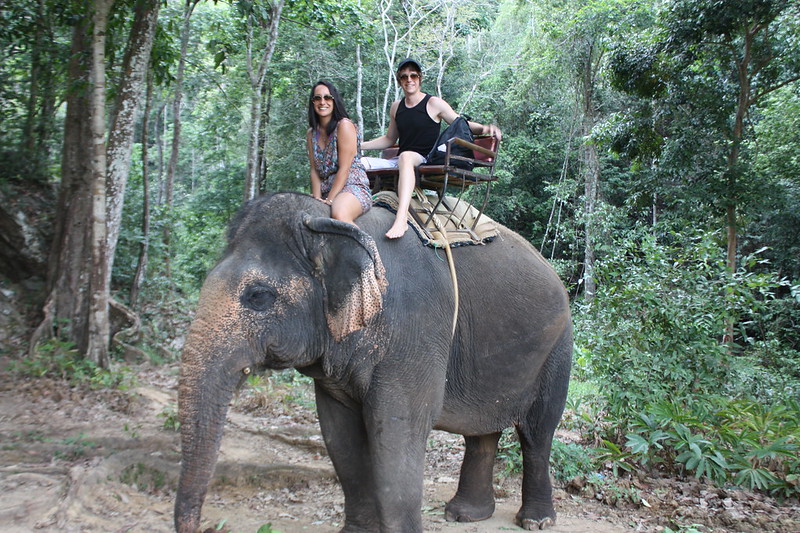 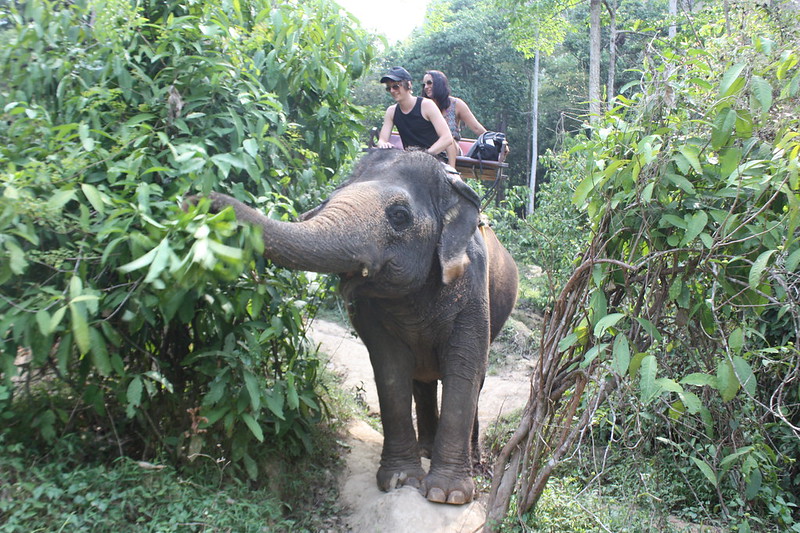 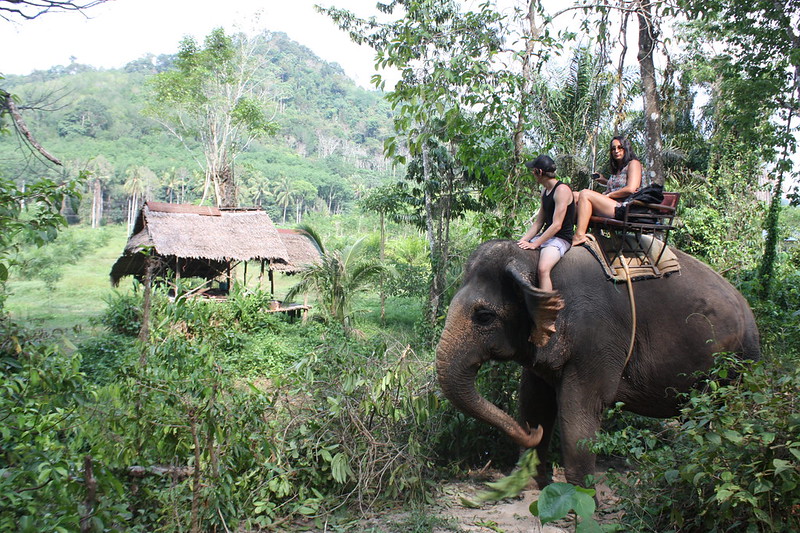 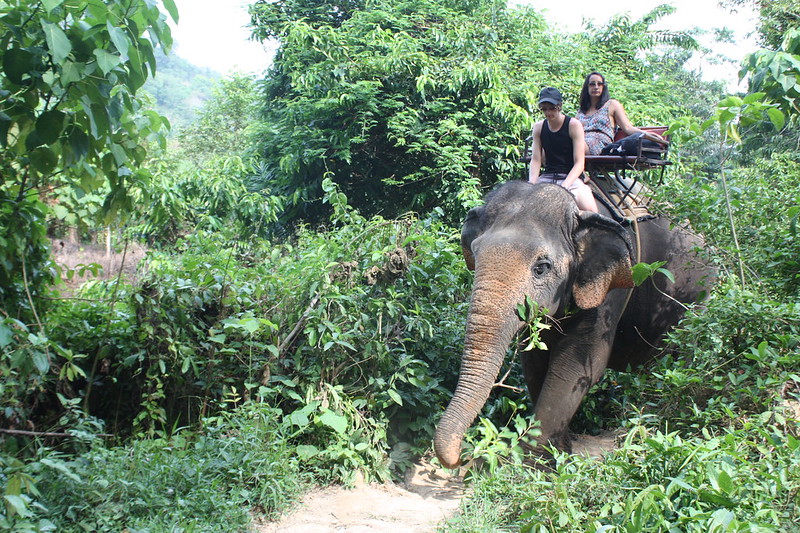 Next, we went swimming with another lady elephant. This one did an awful lot of pooping, and at one point I was completely surrounded by it, before the current took it away down river.

Otherwise, it was just as lovely as previously. Elephant moves around and underneath you, sprays you with water. Sits down in the water as you swim around her. Again, another lovely, glorious experience. Really difficult to remember that as wonderful as it was, she’d never interact like this with anyone in the wild. Never ever.

She’s been trained to do this, for our benefit, so someone else can make a profit. 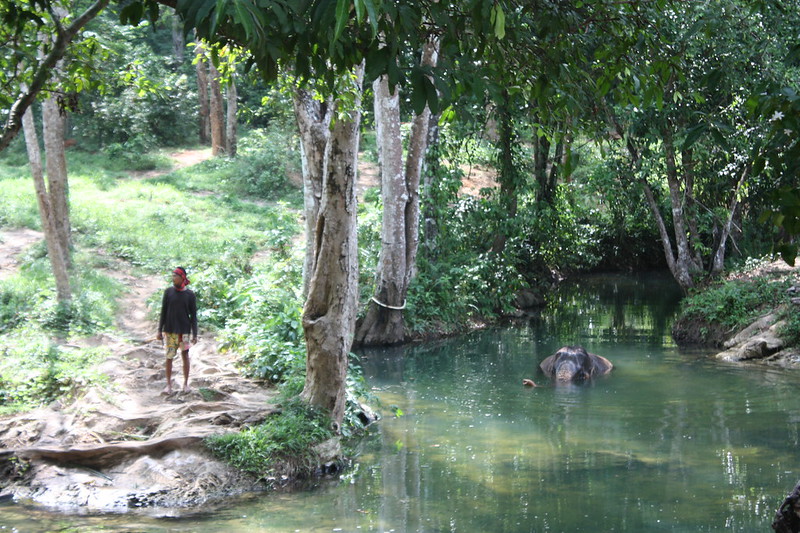 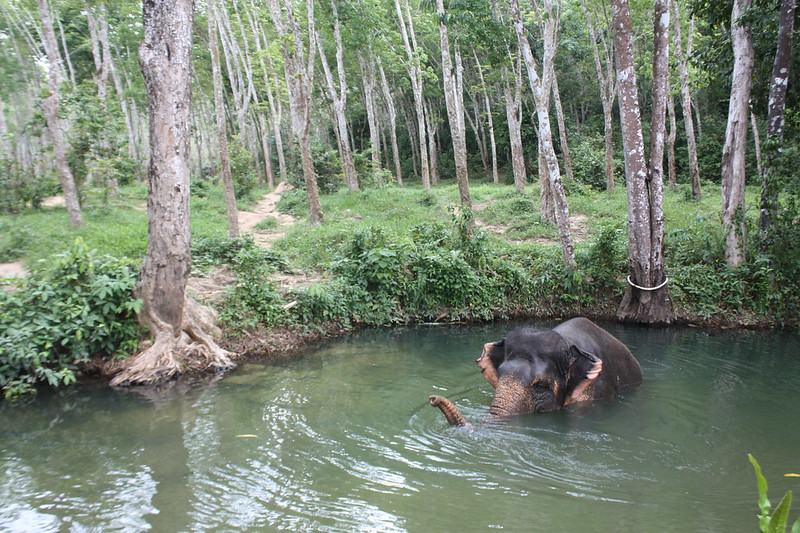 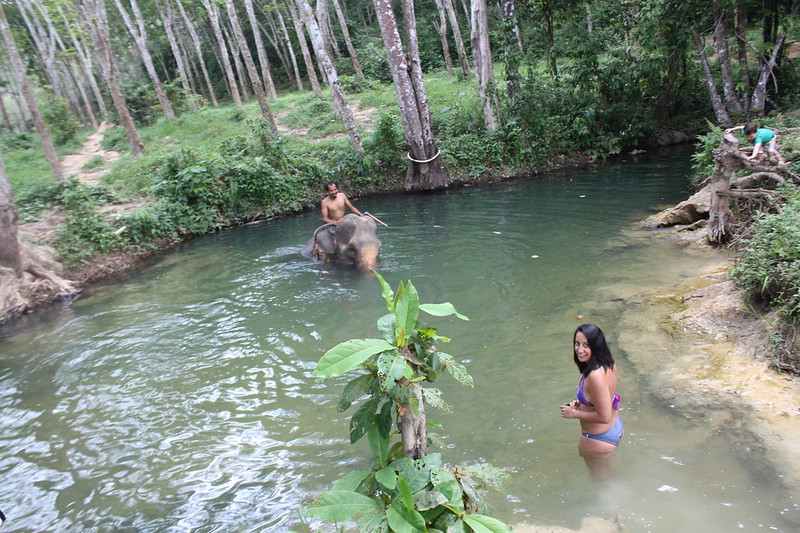 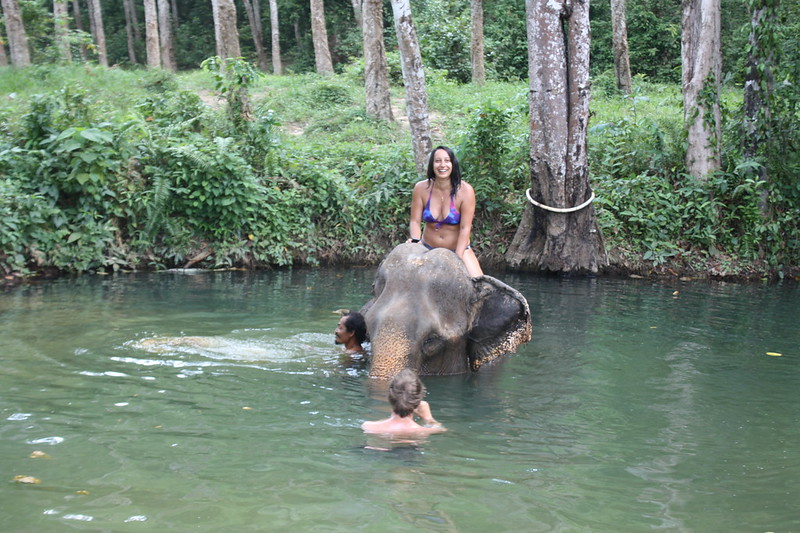 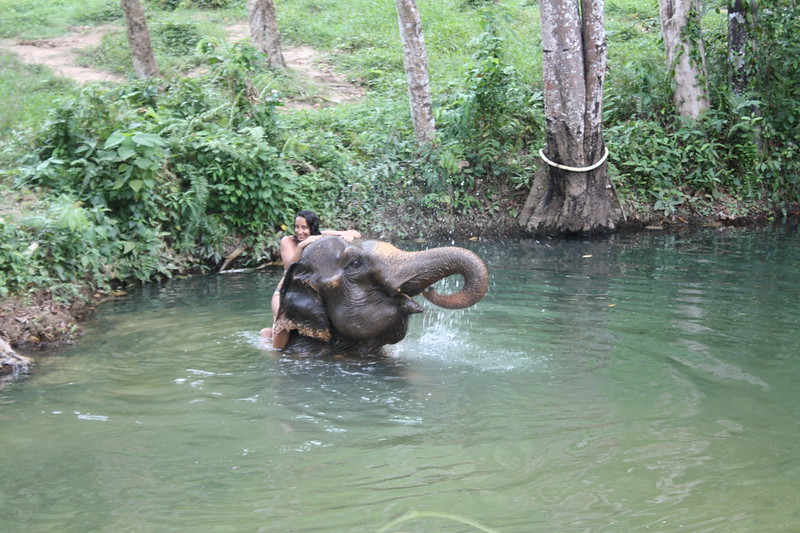 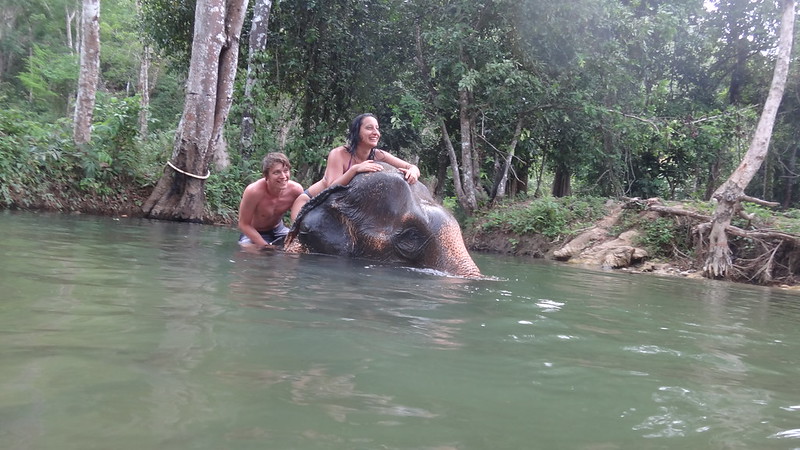 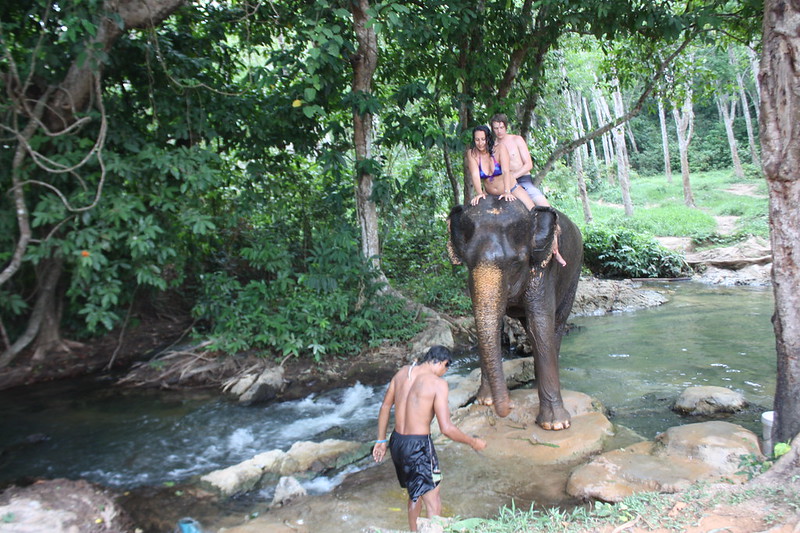 So, if I was ashamed before about the tigers, I’m even more ashamed now.

How to help? – Do your research.

I didn’t know. I didn’t think. I didn’t ask questions. I should have.

If you want to visit with elephants, make sure you’re doing it at a sanctuary like the Elephant Nature Park. This place? Rescues elephants from abuse, exactly like the two places that I visited. The Nosey Parker Elephant Park and the Elephant Village Muang Sing both train unnatural behaviour for tourist + profit. They both crush their elephants into submission.

There are places like that. You can still interact with them, apparently. However the elephants aren’t forced into interacting with you.

Donate to WWF. Turns out the Asian Elephant is endangered (there are now less than 2000 wild elephants living in Thailand) and it’s habitat is shrinking thanks to an ever growing human population. Wild elephant populations are mostly small, isolated, and unable to join as ancient migratory routes are cut off by human settlements.

WWF is committed to conserving the remaining wild populations and their habitats. It’s a worthy cause, I think.